We will start with the same question as with the previous interviews: what is your history with Soittorasia?

I joined the club in 2008 and played one season with Soittorasia IV in the 4.division. After that I have irregularly played in the 2.division team – this is my third season. I enjoy the unique culture in the team, where the trainings are often executed with the same enthusiasm than the games. We have a good and constant team without any star players. “I lllove it!”

You played in Germany 2012-13, where exactly and how did you end up there?

It had been clear to me for some years already, that I wanted to play abroad and I thought it would be a good idea to combine studies and floorball. Basically I searched for places where there is a partner university of my home university (Tampere University of Technology) and a chance to play. There I was comparing distances between different cities using google maps – I found out there is a technical university in Braunschweig and a Bundesleague team in a town called Wernigerode, about 70km from Braunschweig. When I found out they are teaching biotechnology at TU Braunschweig, I thought this is it. I contacted people from the Red Devils Wernigerode to ask if I could play for them.

I was asked to join a “training week” in the winter time to get to know to the guys and introduce myself. The deadline for the exchange year application was near, I had just recovered from a bone fracture and I had heard there are many other players wanting to join the team as well. It all made me really nervous, because it would have been a huge disappointment for me if I would have been accepted to the university but needed to find another club. Luckily it all turned out fine for me. I joined the team with three other Finns who lived in Wernigerode and only played floorball. I lived there a month before I moved to Braunschweig and we became good friends with each other.

How did the season go in Wernigerode? What was your best memory?

After many memorable games we won the German Cup. First we drove 400km to Dümpten in the west where we encountered a 2.league team. I think it was the end of October and +20°C outside. The team from Dümpten had a bunch of young fans making noise throughout the game. They went crazy as we were 6-3 behind after the first period. The atmosphere was great with all the flags, drums and singing. After the game they were waiting for us outside the arena and shouting some slurs. Anyway that was the only game we played so far in the west.  Another nice game was 250km away in Dresden at 11am! I can’t remember exactly when we needed to wake up, but I had read an interview about their goalkeeper: he was joking about them sleeping late in their beds. I don’t like waking up too early in the weekends and we decided to take that specific game very seriously. I think that was the only game in Germany where I made 6 points.

In the Final4 tournament there were 4 teams left out of 48. We played our semifinal against Bonn (2.league). My line sucked hard at that game and we almost lost the game. After being 5-1 behind, we ended up winning 10 seconds before the overtime ran out. The final was a tight game and I don’t remember much of it, although I have the game on video. I just remember that we played as a team and I felt the whole time that we are going to win. Also the line where I played in was doing better and our best scorer Aku made a hat trick. There were a lot of spectators and everything was arranged professionally. 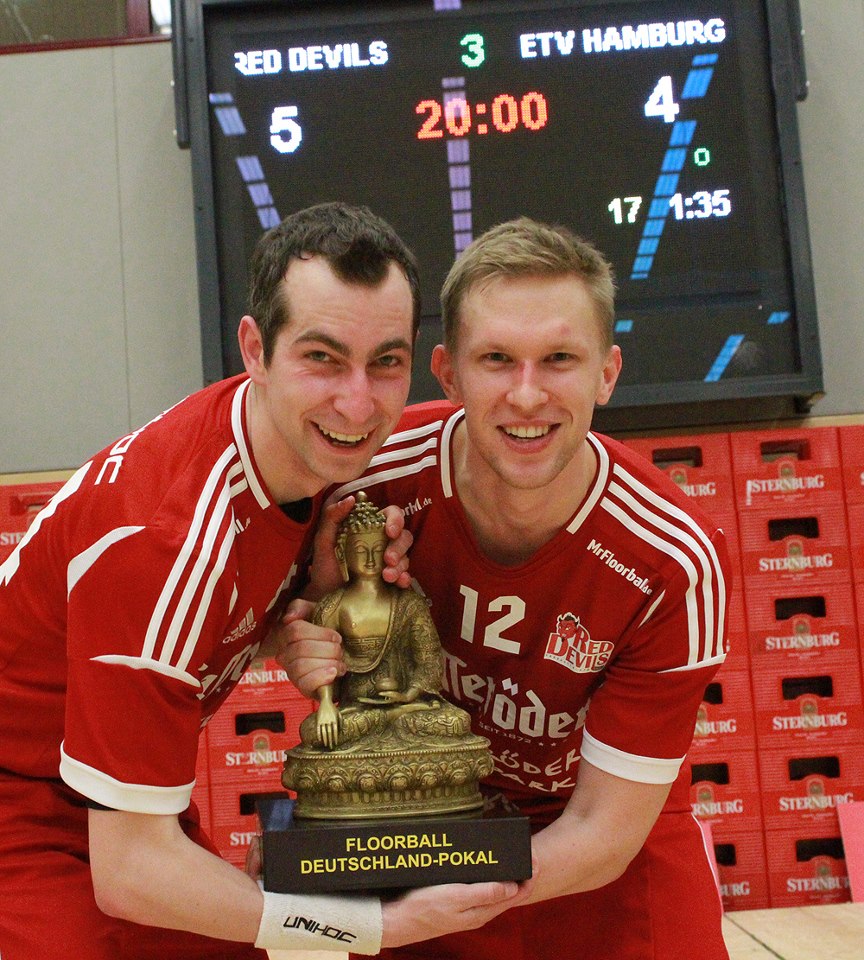 “Me and our captain Raiko Krüger after winning the cup. Raiko lived in Braunschweig as well, drove me to the trainings (200km/h never ceases to amaze a Finn), went to see football with me and introduced me to so many other things in the German culture.” Photo: Stefanie Dabrowski

After winning the cup, we still had Bundesleague games left. In the semifinals we lost two games in the overtime. The first one, an 11-10 loss after the craziest game ever made me sick for days! Later on I have completely accepted the semifinal losses, something like that happens every day in sport. We were not good enough. Besides, one of the most bittersweet memory is related to the first semifinal loss: some seconds after the deciding goal we vanished into the locker room. A team mate told us to go and thank the fans, which we of course did. As we re-entered the field all the away fans were there chanting “Devils! Devils!” despite the bitter loss. At the same time I was sorry, sad, yet happy, thankful and proud.

In the bronze game we played a home game against Berlin – in the regular season we had beaten them both home and away. It seemed that no one (including Berlin) in the hall care who won the bronze medals, which by the way did not physically exist. The number of audience was also smaller than in any of the regular season home games. We were ahead most of the game but one could describe our performance with a German word “scheiße”. In the end Berlin scored three fast goals and thus won the game. After the game I was only slightly frustrated, but as time has gone by, I sometimes still keep thinking about the way we played. Why would you want to suck in the last game of the season? 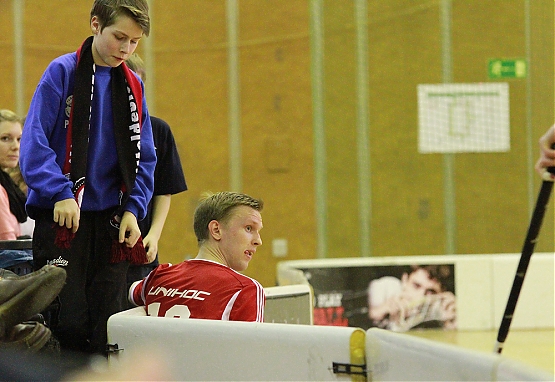 “The first semifinal and I have probably just twisted my ankle. Unfortunately I did not notice it immediately: when I did, the game was on and I limped to the bench next to me. It led to the opponent scoring a goal. One of the many unlikely events in that game.” Photo: Stefanie Dabrowski

There are regularly some stories about bureaucracy in Finland. Germany is quite a bureaucratic country as well. Do you have any funny “only in Germany” stories?

I have a good one about printing at the university! First of all, at the main campus you were not allowed to enter the printer room. There was a person arranging the papers every 30 minutes into a paper holder, where you could pick your own prints. In another building you were allowed to pick your papers directly from the printer. Well, once the printer was out of paper so I added some. What I didn’t know was that I was being watched through a surveillance camera. Five seconds later two guys showed up from the room next-door. The other started to shout at me in German that I need to pay for the expensive printers if I break them. He then checked the printer and said to the other guy “looks like it is functioning properly”. I thought it’s best to keep quiet. I mean, I added paper to a printer.

In the floorball scene there was also an unbelievable case. A committee responsible for the rules had forgotten to define which teams are playing against each other in the Bundesleague semifinals. One team protested and wanted the semifinal pairs to be drawn – which really happened! There was only one team supporting the draw. If this would happen in the Finnish Salibandyliiga, that would be the joke of the decade! And there is more to it: if I got it right, the committee responsible for the rules consisted of a player from that one particular protesting team, his girlfriend and a third person. So he kind of made a mistake, “found it”, protested against it and got to arrange a draw, even though no other team was supporting it.

How would you describe floorball’s position and level in Germany?

Well, floorball is one of the few things that is bigger and more traditional in Finland than in Germany. I know floorball is played pretty much everywhere in Germany, but it is so small that, according to my experience, most of the people don’t even know the sport yet. For comparison, there are 50 000 registered players in Finland (population 5 million) and 10 000 licensed players in Germany (population 80 million).

The level of floorball in Germany is affected by the low number of players. Of course there are already many really good players, but there is not enough competition yet to make the level comparable to Finland. On the other hand the circumstances were already good. In Wernigerode, there were many hard-working persons setting everything up for the players, marketing the sport and so on. We also had the best fans of the league. All the things a player needs were arranged, so we were mostly able to focus on playing. I am still really thankful for all the support, because at least for a student, it is really expensive to play at a competitive level here in Finland. After the game you could just grab a sandwich and a bier at the hall and chat with friends. Sometimes I miss the laid-back moments at the players’ apartment after our Friday trainings. We were eating a lot, watching TV and talking what has happened during the week.

For the juniors I would like to send some tips if they are reading this. Be thankful of the circumstances and support you get, don’t take it for granted. It is not enough to make it to the men’s team, one needs to show that they can play there and that requires a good attitude! If possible, go and play floorball after school with friends or on your own. Playing alone with the ball, throwing it in the air, shooting and dribbling. If you do that, the results will show soon. That’s how Ramon Ibold did and that’s how most of the good players I know have done it. You just don’t get enough ball contacts only in the team trainings. 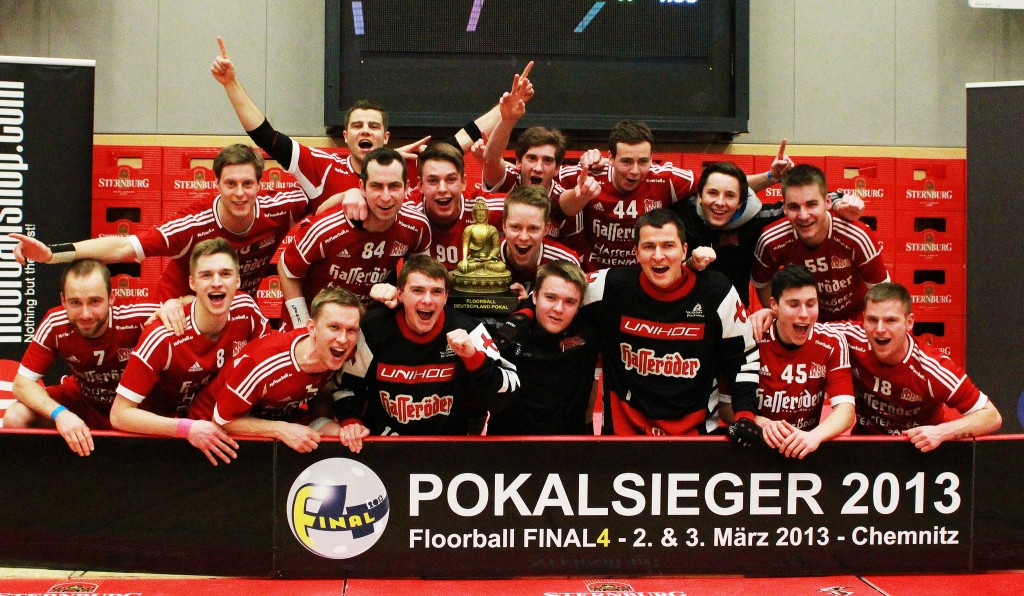